According to the just released LightCounting April 2019 edition of the Optical Communications Market Forecast Report, the global optical transceiver market will be overdue for growth after two slower than expected years in 2017-2018. Most likely, it finds, 2019 will be another slow year. The research company then asks: what would it take to put this market back on track for 20 years of 14% CAGR for 2003-2024, (as illustrated in Figure 1)?

LightCounting reckons it should not take much. This is the company’s short wish list for 2019-2020:

The company says the last bullet point is the most critical for the market growth in 2020-2024. Ethernet is already the largest segment of the global optical transceiver market, and it is projected to account for 64% of the total in 2024, up from 45% in 2016.

The April report finds that demand for 100GbE Ethernet transceivers was very strong in 2017-2018, but very steep price declines (up to 50% in 2018) limited growth in sales revenue.

Normalised average price of Ethernet transceivers declined from above US$6/Gbits/s in 2016 to US$3/Gbits/s in 2018. Despite projected moderation in price declines in 2020-2024, the normalised price is projected to drop to just above US$1/Gbits/s by 2024.

LightCounting states that the problem is that there are too many different next generation products on the roadmap now. Google is deploying 2x200GbE SR8 and FR8 transceivers, Amazon plans to use 4x100G DR4, and Facebook is staying with 100GbE for now, and plans to use 200GbE next. Other cloud companies have not publicly finalised their plans yet. Because of this fragmentation none of the products will reach very high volumes, justifying price declines observed in 2018. This may not be great for the customers, but it would be a well overdue break for suppliers. 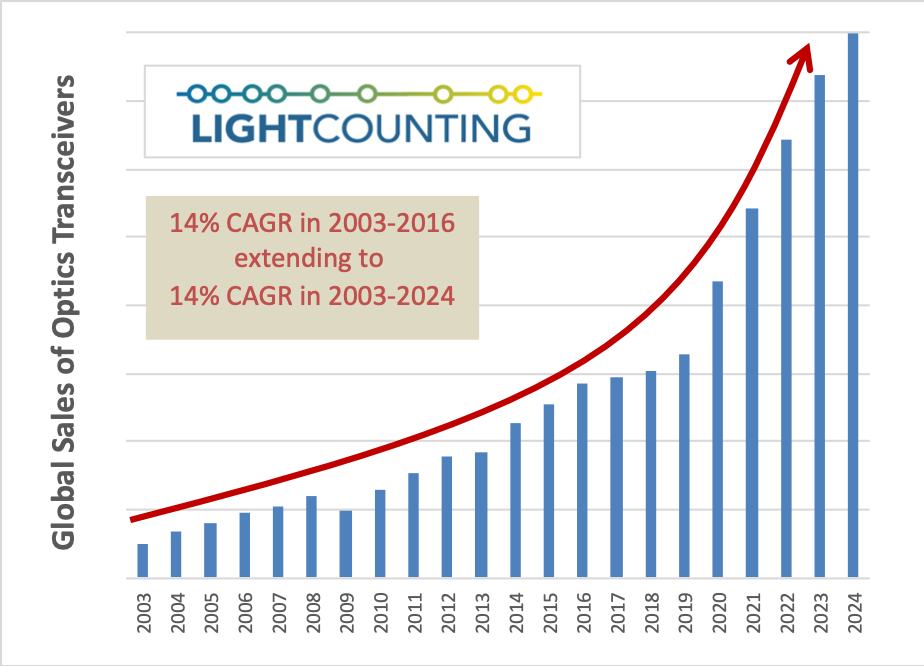 The updated forecast includes revised projections for the wireless fronthaul and backhaul market to account for changes in deployment plans at China Mobile. It also presents a new analysis suggesting that the percentage of fibre not equipped with optical transmitters (or dark fibre) increased in 2017-2018. A lot of this dark fibre will be used in the fronthaul and backhaul applications.

The forecast also includes a more detailed forecast for WSS modules, as well as high-speed modulators and coherent receivers for DWDM applications. Demand for WSS modules increased sharply in 2018 mostly due to deployments of these modules in China. Demand for pump lasers and fibre amplifiers (not included in this forecast) was also strong in 2017-2018. An increase in sales of these products is a leading indicator for higher sales of DWDM transceivers, modulators, coherent receivers and tunable lasers in the next 2-3 years. This is consistent with LightCounting’s forecast, but growth in sales of those products on a merchant market will be limited by internal manufacturing of these devices by the leading equipment suppliers, including Ciena and Huawei.

This site uses cookies. By continuing to browse the site, you are agreeing to our use of cookies.

We may request cookies to be set on your device. We use cookies to let us know when you visit our websites, how you interact with us, to enrich your user experience, and to customize your relationship with our website.

Click on the different category headings to find out more. You can also change some of your preferences. Note that blocking some types of cookies may impact your experience on our websites and the services we are able to offer.

These cookies are strictly necessary to provide you with services available through our website and to use some of its features.

Because these cookies are strictly necessary to deliver the website, you cannot refuse them without impacting how our site functions. You can block or delete them by changing your browser settings and force blocking all cookies on this website.

We also use different external services like Google Webfonts, Google Maps and external Video providers. Since these providers may collect personal data like your IP address we allow you to block them here. Please be aware that this might heavily reduce the functionality and appearance of our site. Changes will take effect once you reload the page.